You are here: Home / News / Altcoin News / Tron, Stellar, Litecoin are not the over-hyped coins, claims a new report An indicator reveals the hype game of few cryptocurrencies. Research platform “The Tie” shared a detail report on which cryptocurrencies are the most and the least overhyped on crypto Twitter.

TRX, XLM, and LTC are not overhyped

Often, crypto projects run the race of capturing most audience and users via bot accounts tweeting about them, increasing user engagement ratio to make it more genuine. Recently, The Tie, which offers valuable information for crypto traders created “Hype-Activity-Ratio.” The validator affirms that the tool measures “the number of tweets each crypto has per $1million in trading volume.”

Across the 450 cryptos, we investigated, there was an average of 1.02 tweets per $1M in volume, The TIE wrote. We used 30-day averages for the tweet and trading volumes.

However, The Tie claims that “While this metric is not perfect, we think it’s a good tool for identifying massive outliers.” 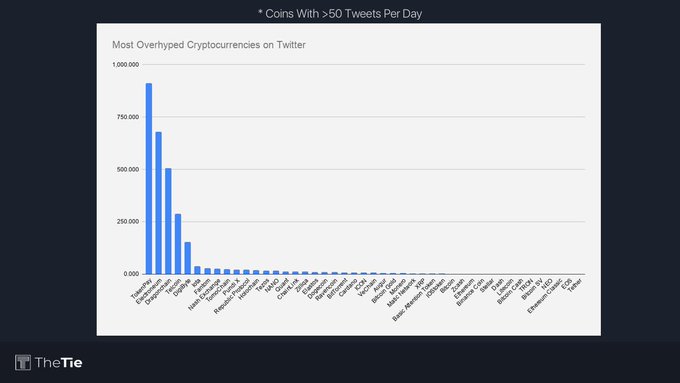 The Most and Least Over-hyped Cryptocurrencies

On the other hand, the platform finds Tether, EThereum Classic, EOS, NEO, and Cosmos as the least overhyped crypto, which has the very lowest number of tweets per $1 million trading volume. However, cryptocurrencies such as TokenPay, Electroneum, Dragonchain, Telcoin, and DigiByte are termed as the most overhyped cryptocurrencies on Twitter. Notably, the platform mentioned;

These tokens had more than 500 times more tweets per $1M in trading volume than the average crypto.

These tokens, Token Pay, Electroneurm, Dragoncoin, doesn’t hold much trading volume, but the increased activity on Twitter made them the most overhyped cryptocurrencies – presumably, they are paying much to its army.

Moreover, the platform analyzed the “hype-activity-ration” of the few largest cryptocurrencies, including Bitcoin, Ethereum, Bitcoin Cash, and Litecoin. According to its logarithmic chart, these coins have relatively consistent Hype to Activity ratio. It outlined that the Ripple’s XRP with its tags (such as #XRPthestandard, #XRPcommunity ) is significantly higher than the above most significant coins.

In the previous tweet we ignored the hashtags #XRPCommunity, #XRPTheStandard, and #XRPArmy, but if we include them the hype to activity ratio of XRP spikes to 6.66.

>33% of all XRP tweets use those hashtags and XRP accounts for 6x more tweets/trading than the average coin. pic.twitter.com/h2cRuf8APy

Although many within crypto can easily detect manipulative practices, this deception is aimed at new entrants into crypto who are often less informed.