You are here: Home / News / Altcoin News / Ethereum’s High Fees over Bitcoin is not “Bullish” for Ether Bitcoin and Ethereum are at the top of the digital asset industry, and regardless of the major difference in market caps, the respective communities continue to nitpick on each other’s performance. The Ethereum community is currently operating at an elevated level of optimism as the advancement of ETH 2.0 continues to pick up the pace.

Now, according to a recent analysis by Glassnode, Ethereum’s blockchain is reportedly being used more than Bitcoin’s network as well.

The chart above illustrated that for the third straight week, Ethereum incurred higher transaction fees with respect to Bitcoin. Over the course of their co-existence, ETH fees were higher than Bitcoin’s only on a separate occasion back in May 2018.

While many began to run away from the above narrative, linking another bullish narrative to Ethereum, the background story behind Ethereum ‘s rising transaction fee might be entirely different.

A recent report covered an in-depth analysis of how ETH fees are distributed across various transactions. Over the past few years, user addresses have often been identified as EOAs. EOAs are defined as accounts that are controlled by private keys and do not have associated code with the blockchain. A higher percentage of users are usually EOA accounts. 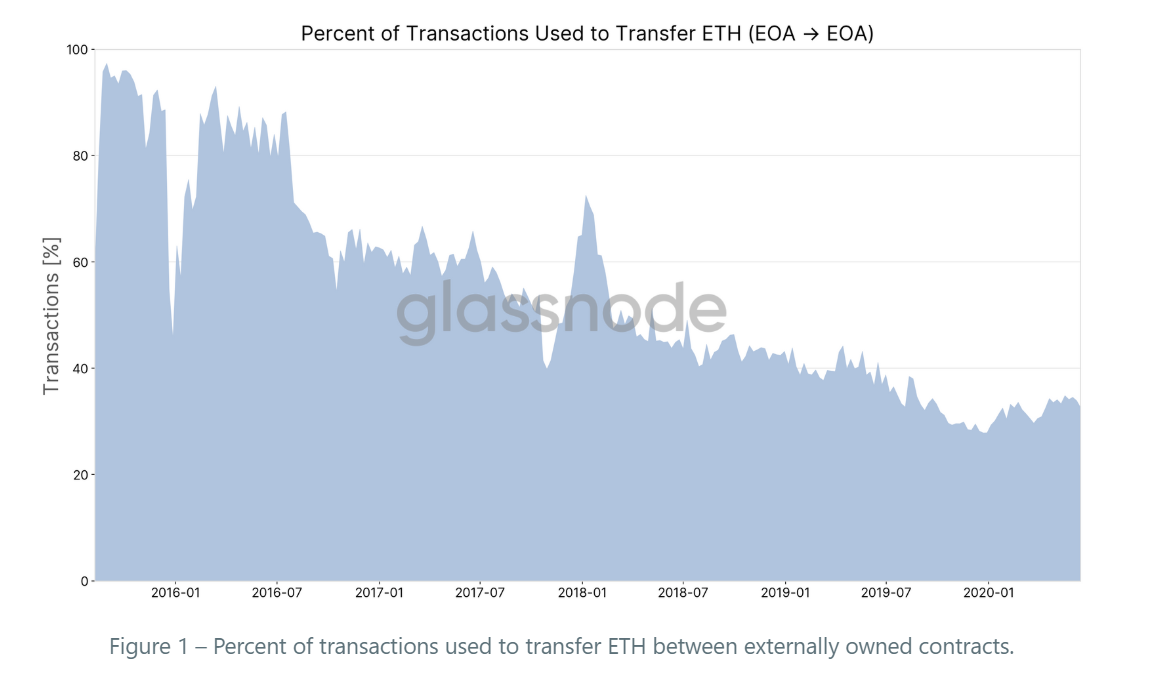 In light of that, the above chart indicated that only 34.2% of the network transactions were used by EOAs to transfer ETH, and only 10.7% of the total fees were spent on actual transactions in 2020. The above chart is clear evidence that a majority of ETH fees are haven’t been used for ETH transfers.

What about the other 89% transaction fees?

According to the report, a majority of the fees(52.4%) have been used in “other contracts” in 2020. These other contracts transaction do not utilize the functionality of ERC20 or ERC721 standards, meaning that ether has been barely used. The analysis further stated,

Additionally, it was also noted that with respect to average fees per category, the most expensive transactions were zero-value ETH transactions sent between various ETH EOAs (Externally-Owned Addresses). Although it was common for zero-value transactions to take place in the ETH blockchain while initiating smart contracts, such high levels of fees were not expected.

Ethereum’s high transaction fee; not a good indicator of progress?

In the hindsight, it is legitimate to state that Ethereum’s blockchain is being used more in Bitcoin’s network but the above data would suggest an absence of positive implications for Ether tokens. With higher issuance of USDT on the Ethereum blockchain, the native token is currently facing a stagnancy in terms of valuation in its own parent blockchain.