After consolidating under the range of $250 since the 30th of May, Ethereum breached up its long-term resistance with significant bullish momentum. The rally breaking out at the time of writing for the largest altcoin has witnessed the asset surged past its previous yearly high of $289.

As observed in the above chart, the value of Ethereum has spiked by 27 percent in the last 72 hours, with the valuation going over $300 for the first time since 9 July 2019. The market cap of the asset is currently above the $33 billion mark, busting past the $30 billion range of the past day.

For many days in the past few weeks, DeFi ‘s impact on Ether has been under a lot of rubble. DeFi ‘s Yield Farming has resulted in a $3 billion surge in Total Locked Value or TVL over the last month. However, the price of Ether was reluctant to register any movement, despite being the primary token of Ethereum. DeFi is currently above $4 billion in TVL, which is over 250 percent growth since June.

The role of Ether for DeFi has been made clear in the past, but several Ethereum proponents believed that the effect of DeFi ‘s growth on Yield Farming would eventually permeate Ether.

After transaction fees and gas prices have reached new highs on the Ethereum platform, the value of Ether has finally undergone a bullish breakout recording a new yearly high in 2020.

In comparison, Bitcoin hasn’t registered much of change in the same time period. Although BTC has been largely positive as well over the past few days, it registered only a hike of 1.01% to Ethereum’s 6.88 percent raise over the past 24-hours. 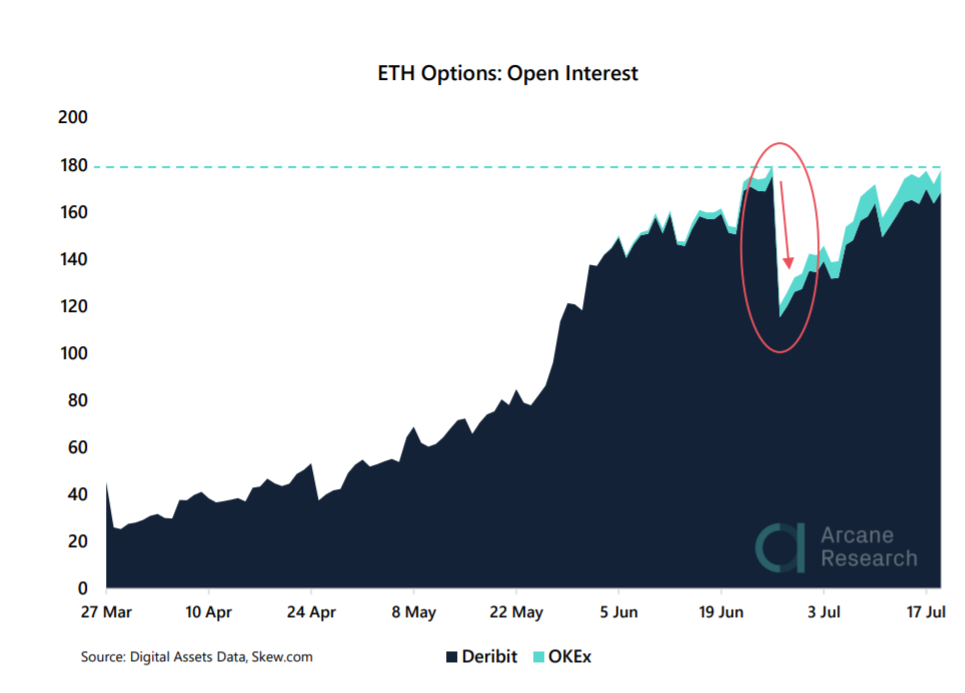 The price situation for Ethereum was developing at press time but positive signs may have risen way early in the week itself. Data from Arcane Research suggested that the Open-Interest on 26th June contracts for ETH was close to $170 million.

Early in July, the OI had drastically declined following June contracts expiry but the options markets had started to get a wind of the bullish market once again.

Considering Ethereum is able to avoid a major correction in the next few days and it maintains its position above the previous yearly-high of $288, the largest altcoin could be looking at a largely lucrative quarter.