When we talk of public-tradable companies in the digital asset industry, very few organizations will come to mind. These organizations are small businesses, and none of the multi-billion dollar corporations has taken a step into the Crypto IPO.

Over the past few years, there have been talks about Coinbase and BlockFi taking the big step forward but nothing constructive has manifested from either side till now. Now, According to Messari, a third party might also soon throw their hat into the Crypto IPO mix, which happens to be Barry Silbert’s Digital Currency Group.

Digital Currency Group or DCG is a venture capital company that has several established crypto businesses under its administration. The organization has been around for over 5 years, and it has developed corporations such as Genesis Global Trading and Grayscale Investments. Additionally, DCG also controlled CoinDesk and Internation retail exchange, Luno, under its wing.

While discussions over a Crypto IPO have not been raised publicly for DCG’s end, the report crunched down some numbers, which indicated that DCG would present a strong case for a successful IPO.

Barry Silbert and his numbers game with Genesis, Grayscale 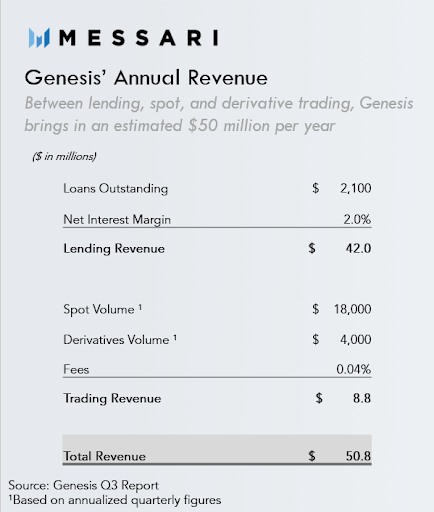 According to the report, Genesis recently revealed its quarterly report for Q3 2020. Genesis Global Trading, an OTC crypto trading desk, and crypto lending/borrowing platform, registered loans which surpassed $5 billion on the quarter. The total active loans were estimated to be $2.1 billion which would bring is $42 million annual revenue at the moment.

Additionally, on the trading aside, Genesis registered over $1 billion in derivatives trading and $4.5 billion in spot volumes, where estimated trading revenue is expected to be around $8.8 million.

These are extremely impressive numbers and with respect to Grayscale, the crypto industry already had an idea. Grayscale’s flagship product, GBTC has continued to aggressively accumulate BTC in 2020, currently occupying close to 2% of total circulation. Grayscale was bringing in close to $159 million in revenue per year. The report added,

“With Genesis and Grayscale generating an estimated $50M and $123M a year, that still leaves Coindesk and Luno. On top of that, DCG also has a sizeable investment arm, consisting of both liquid and VC investments that would bring their total valuation to around $4.3 billion.”

The $4.3 billion valuation of DCG is impressive. It is impressive enough to take the IPO step but Barry Silbert’s organization had an added advantage. One of the key fundamentals before going public is to attain a list of clients that come from an institutional background and high net worth individuals. A retail heavy clientele does not attract that right kind of people to undertake the proceeding of an IPO. For Genesis and Grayscale, it has been their major source of revenue. Genesis trading strictly caters to the demands of institutional investors and in 2019, it facilitated the crypto-fiat lending system due to immense institutional demand.

Grayscale’s stance in the public eye is already clear as day, with the investment wing catering to institutions trying to attain exposure to digital assets. Hence, with Digital Currency Group, a Crypto IPO can be manifested in a matter of months, if Barry Silbert decides to take the company public.